BIWFC Europe Director Presents at Several Conferences During Summer of 2022

The summer of 2022 has been quite busy and I am delighted to share the highlights of several events that I attended in the past few months.  Among my presentations were: “Fertility Control To Mitigate Human-Wildlife Conflicts And Promote Coexistence” at the UFAW Conference Advancing Animal Welfare Science in Edinburgh, UK and “Fertility control for an overcrowded world: from mice to elephants” at the 7th International Conference on Rodent Biology and Management in Arusha, Tanzania.

In mid-August I was invited by the Singapore National Parks Board (NParks) to participate in a 2-day workshop entitled Wildlife Management Stakeholder Engagement. NParks is the statutory board overseeing greenery, biodiversity, conservation, wildlife and animal health, welfare and management in Singapore. The invitation was to give a talk on global wild boar population trends and management. I also gave a second talk, entitled “Too many? Fertility control for an overcrowded world: from mice to elephants.”

As this was my first visit to Singapore, I spent a few days with NParks staff visiting various urban and rural areas to appreciate the main human-wildlife  interactions in this part of the world. This was a naturalist dream: I saw giants like water monitor lizards and estuarine crocodiles that can grow up to 3m and 5m long respectively. I met a macaques sucking its fingers whilst extracting seeds from a pod, and a family of smooth-coated otters in one of the city’s busiest areas. I witnessed the problems that may arise when people take selfies with wild animals, without appreciating that these animals are not pets. 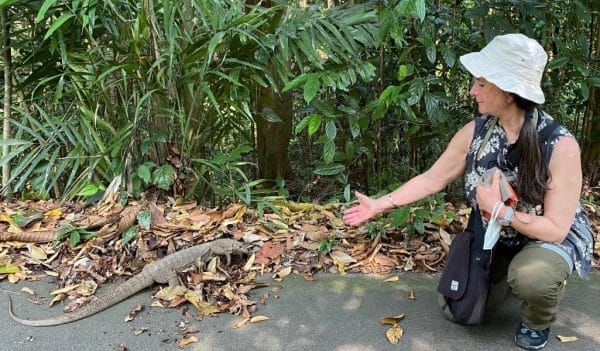 Singapore is one of the most densely populated areas on earth, but it is also a hotspot for biodiversity. Despite having lost much of its original primary tropical forests, the island has an incredible number of animal and plant species. For instance, the 163 hectares (~400 acres) of the Bukit Timah Nature Reserve are home to more tree species then the whole of the North American continent. Nearly 500 species of plants, animals, and algae new to Singapore were recorded between 2002 and 2012 of which more than 100 species were new to science.

Through its “City in Nature” vision, Singapore is seeking ways to live with its rich wildlife landscape and to mitigate human-wildlife interactions involving species like smooth coated otters, wild boar, snakes, civets and macaques. In very crowded places, these encounters may lead to problems such as traffic accidents, nuisance behavior, danger to humans and to animals, for instance when venomous snakes are found in urban areas.

The workshop was an exercise in listening to different stakeholders. There was a genuine will to hear points of view and to avoid polarization of opinions before they became entrenched. The workshop went beyond what is typically discussed in these meetings, e.g. population ecology, management, and public education, and emphasized the community stewardship aspect of human wildlife interactions.

My talks generated a lot of questions, which is always a good sign of public interest. I was delighted to discuss options for wildlife fertility control with many of the participants and to be asked to present some closing remarks on the whole meeting.

In places like Singapore, or in similarly “overcrowded” places like Israel, that I visited for a similar workshop in 2019, I see a glimpse of a fast-approaching future. If the number of people continues to grow worldwide, context-specific solutions will be required to manage human wildlife interactions and to promote coexistence. This “listening workshop,” which gave me a fantastic opportunity to promote the mission of the BIWFC, was a very wise step in the right direction.

In September I attended the 13th International Symposium on Wild Boar and Other Suids in Seva (Spain) and presented the plenary talk “What we don’t know about wild boar: knowledge gaps and research priorities for an overcrowded world address.” The conference was attended by 225 participants from 25 countries. This highlighted the global relevance of human-wild boar interactions as wild boar and wild pigs, as well as their associated economic and environmental impacts, continue to grow worldwide.

During the conference I had the opportunity to interview various colleagues on the role that fertility control might play in reducing population growth rate of this species. The results were very interesting. Although everyone acknowledged that culling by hunters is not sufficient to limit the growth of this species, fertility control was greeted with many and varied replies that ranged from interest on oral contraceptives, particularly for urban areas, to beliefs that in some areas such as Eastern Europe, where hunting generates significant income, contraception will not be acceptable by many.

Other objections to fertility control include:
• in the short term this will not prevent crop damage or reduce the presence of wild boar in urban areas
• it will not be feasible to achieve adequate proportions of sterilised animals to reduce population size at large scale
• contraceptives are “not natural” but culling is, as it substitutes predators
• European consumers are increasingly opting to eat local products that have not been treated with “chemicals”

This reluctance to eat meat treated with chemicals has led to the unwillingness of consumers to eat pigs treated with a vaccine that chemically castrates males to avoid their meat developing the “boar-taint” taste, even if other forms if castration employed by the pig industry are generally regarded as inhumane.

This looks incredibly complicated but the fundamental issue remains: all these objections, that raise valid points in different contexts, are not an answer to increasing wild boar impacts. We clearly have a lot of work to do, particularly in the development of oral contraceptives, but now more than ever we cannot afford to dismiss alternative methods, such as fertility control, to integrate current options of population management for this species.